Taking A Look At The Opposition To the Seattle Arena 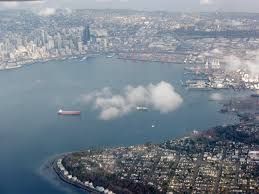 Seattle Down Town, the Stadium District, and the Port of Seattle

Our coverage of the Seattle Arena is probably one of the most consistently viewed topics on this blog (what that says about our coverage of college football and other sports is not worth thinking about). It is the best Arena deal you could ask for because it offers all sorts of public protection and it pays back the construction bonds using an increase on the already existing Admissions Tax for the arena. In other words the people who attend events at the Arena are the ones who pay the city back for the construction bonds. And that is what makes the opposition to the Arena just so mind-boggling to me.

Chris Hansen’s original proposal faced all sorts of public opposition similar to the opposition that Clay Bennett’s faux arena proposals faced. Eventually this proposal won over the majority of the people skeptics by his over whelming willingness to compromise with the Seattle City Council on several issues regarding this deal. That is probably the reason Hansen’s arena plan has moved so quickly through a political scene that is known for slowing down public/private projects to a crawl.

Notice in the preceding paragraph how I used the poorly phrased term “people skeptics”; well believe it or not that was intentional. The reason for this is that a collaboration of private and public corporations has officially opposed the arena deal in the SODO area and for reasons that, at least to me; do not make a lot of sense. And that is the point of this post, to take a look at the objections raised by the Seattle Mariners, Port of Seattle and the Longshoremen Union; and then to point out some of the flaws I see in their logic.

The SODO Arena will greatly increase the traffic in the SODO area and therefore affect the Port’s ability to handle freight and get it in and out in a timely fashion.

The SODO Arena’s impact on traffic will prevent potential expansion of the Port AND impair the Port’s bottom line causing the Port to lay off workers [union members].

If you would like to see what the Port has to say about its potential expansion (which includes Sea/Tac International Airport) look no further then here. From what I can tell it looks like the Port is focused on becoming more efficient and more green while adding around 100,000 jobs. Adding that any people will greatly affect traffic in the area no matter how you slice it and dice it. There is no doubt that the Port is one of the most important employers in the region but citing potential (yet to be approved and/or really studied) expansion as a reason to hold up the creation of thousands of jobs and millions of dollars in tax revenue from tourist.