The Key Arena is Dead; And Here’s The Reasons Why.

Let’s be perfectly clear about something, the Key Arena is dead. And this isn’t a recent development this has been a fact of the Arena’s life since Ackerley said a new arena was needed to keep the Sonics financially viable in the early 1990s. The situation in Seattle only got worse when they made the decision to renovate the Coliseum instead of outright replacing it like Ackerley originally wanted to (and was willing to pay for; for the 700+ word post about this topic, look here). As a result, the Sonics departure became pretty much inevitable, and the issues with the Key would get laid out for all to see; if they actually paid attention that is.

Unfortunately though people have not really paid attention to the problems with the Key and as a result they are now wringing their hands about its future now that the SODO Arena is undergoing an environmental review. And their arguments for why another Key Arena renovation should be considered to make the Key a permanent home for the Sonics doesn’t really make much sense when you consider the issues that the arena has.

The first major issue with the Key is its location. Located in Queen Anne, the Arena is a good deal away from the heart of Seattle’s public transportation and the city’s plethora of parking garages. As a result fans are forced to pay a lot of cash to park near the Seattle Center (ironically named yes?) and the Arena during events. Another fan complaint about the Key, is that it isn’t a very hockey friendly venue; in fact the WHL Thunderbirds got so fed up with the Key that they negotiated a new arena in the nearby city of Kent.

Now that we have taken a look at the problems with the Key from a fan perspective, let us take a look at the more direct resasons why the Key Arena is not, and never was really, an economically viable long-term home for the [new] Sonics/hockey/concerts. First we will look at the issues that the impact the Key’s ability to host the Sonics long-term because that’s what drove the team’s relocation and the current SODO Arena deal. And that would be the Key’s lack of money-making shops and restaurants, the lack of team controlled parking, and the lack of the team’s practice facilities all nearby all negatively impacted the franchise’s ability to earn a profit/win. And as a result you saw the team bounce from Ackerley-to-Schultz-to-Bennett-to-OKC.

All of these problems would become present in the Key Arena when the new Sonics come to town. All of those problems would need to be addressed at the Key if the Key is to become the new Sonics home, and as we found out when Ballmer tried to save the day in 2008; to solve two of those problems (restaurants/shops and practice facility) at the Key would cost roughly $300 million. In 2012 the SODO Arena would cost roughly $490 million. Another thing to consider is that the Key Arena was (and would be) the smallest arena in the NBA; that doesn’t make me feel very confident about the Key’s long-term viability as an NBA Arena.

But the problems with the Key extend far beyond the ability for an NBA Franchise to make a profit. These other problems became apparent after the Sonics departed the City of Seattle; these other problems involve the Key as a concert venue and how easy it is to get concert equipment into the building. 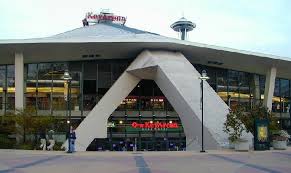 Can you see the lowered floor?

To add 3,000 seats to the Coliseum, back in 1995, they dug down 30 feet. For basketball, those 30 feet provide excellent sight lines and made it an intimidating place to play. But those same 30 feet made it much harder for bands to get their equipment in and out of the venue. The loading bay area shrank, therefore fewer trucks can get into the bays to off load their equipment at once.

And the final issue the Key has with concerts is that the venue for the show is normally the concerts biggest promoter. And when there is a NBA team that means there are 41 dates a year with 15,000+ fans in attendance to promote the concerts and other events occurring at that arena. When the Sonics left for the Ford Center, those guaranteed advertisement viewers went with them. The willingness for bands to overcome the logistical difficulties of playing at the Key also took a sharp dive.

So let’s sum everything up. It would be smarter, money wise, to build an entirely new arena with nearly 1,100 more seats, than to renovate the Key. The Key Arena’s original renovation in 1995 made it an impressive and intimidating basketball venue. But a royal pain for bands to get their equipment in and out. Also when the Sonics relocated, there was a loss of patrons at the Key and as a result a loss of potential advertisement viewers.  In other words the Key Arena was dead back in 1990 when Barry Ackerley said that the Seattle Center Coliseum was no longer a NBA arena and it needed to be replaced.