The Key Arena and The New Sonics 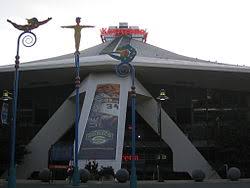 The Key with it’s Sonics’s Regalia

Whether the Sonics return as an expansion franchise (preferred) or as the relocated Sacramento Kings (this would make me very sadz), it is time to take a look at the teams temporary home while the SODO Arena is getting built. A lot has been said by people about the Key Arena; most of it being the uneducated statement of; “why is the Key good enough for the NBA now?”

The reality is, the Key Arena is not a suitable permanent home for the NBA. Previous ownership groups had been hemorrhaging cash at the Key during the teams last decade in Seattle. Some of the reason for the ownership’s loss of cash was increasing player salaries, a lack of team controlled parking, and a lack of revenue producing shops/restaurants. Those are what make it so the Key absolutely can not be the permanent home of the new Sonics.

While those a fore mentioned reasons are mostly responsible for the old Sonics inability to make a profit at the Key Arena; the primary reason the old Sonics failed to earn anything close to a profit was the lease that the team had to agree too; the lease was so tough because the City had to pay off the Key Arena renovation. Fortunately for Chris Hansen, there is no more remaining debt on the 1995 renovation.

Do you guys remember that $45 million that Bennett paid the City of Seattle to allow him to break the Sonics lease on the Key, and move the team to Oklahoma City? It just so happens that the outstanding debt on the Key Arena renovation (back in 2008) was $45 million. That’s right, Ex-Mayor Greg Nichols basically made Bennett pay off the remaining debt on Key Arena.

Now that takes a huge burden (and financial black hole) that  Hansen and his group don’t have to deal with. That beings said, there is still the fact that the Key will be the smallest arena in the NBA; that’s capacity and footprint wise. So they are still going to lose money for the couple of years that they are in the Key, it’s just not going to be as bad what Ackerly, Schultz, and Bennett had to deal with as owners of the Sonics.

That lost revenue could be offset by creating a new Regional Sports Network (RSN for short). In theory, the new RSN would be able to help fill in any revenue deficits that the new Sonics would experience playing at the Key Arena. That would probably be a huge relief for the NBA as it would end up preventing the team from be on the receiving end of revenue sharing; and if it is, the franchise is only receiving a small amount of that sharing.

So basically, the team’s financial stability in Key Arena is going to come down to its ability to create a RSN and generate revenue outside of an arena that lacks revenue generating options.