College football is saying good-bye to the BCS after the 2014 national championship game; and the process of transitioning to a four-team playoff begins. Many people suspect that the four-team playoff is just a stepping stone to an eight team — and then a 16-team — playoff. Hopefully this is true, and there will be a 16-team playoff sometime in the future; a 16-team playoff does create some challenges and a lot of those challenges are only going to be made worse if the selection committee system stays in place. So the question is; what are those issues and how do they get fixed?

Now on to part one: 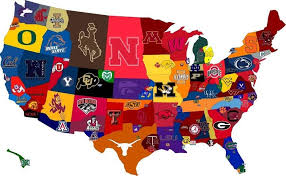 All of these teams have a shot at getting into this tournament scenario.

This is a problem that is probably going to get worse once the transition from the BCS (which has computer rankings as a part of its formula) to the selection committee which is staffed by humans who naturally have their own biases. So how do we fix this?

We guarantee all conference champions a spot in the 16-team playoff, of course. This way all the conferences have at least one team in the tournament. Now that means that there are only ten guaranteed spots in the tournament, and the field is supposed to have 16 teams…we will get to that later, but first we have to deal with those pesky BCS bowl games.

These guys have been a major pain in the a**

The Rose Bowl, Fiesta Bowl, Sugar Bowl, and Orange Bowl are the biggest games at the end of the college football schedule; and they have accumulated a large amount of wealth and power within the world of the FBS. So the fact that there is a college football playoff that takes away some of the prestige from these games is somewhat surprising.

The western and eastern half of the brackets break down as such:

I feel like this gives the tournament the greatest sense of balance, and it makes the most sense going forward. You’ll also notice that I gave away how the tournament field gets to 16-teams.

After the tournament field has been designated, the BCS bowls can still host their regular games. These bowls can also maintain their regular conference alignments as well. For example, the Rose Bowl could take the top Pac-12 and Big-10 team that did not qualify for the playoffs.

As a result of this set up, any conference can send multiple teams to the tournament. Another reason for using a top-25 to determine the wild card spots is so that we don’t completely eliminate those schools that stubbornly remain independent (I’m look at you Notre Dame); it is also important to note, that this tournament doesn’t guarantee a spot for those schools either (again, looking at you Notre Dame).

Click here for the second part of the playoff plan