I do apologize for the long wait everyone, but here we are.  Welcome to the 2014 NBA Finals! 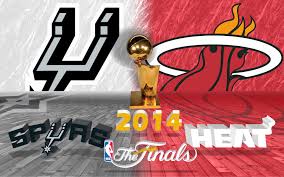 This is a rematch from last year when the San Antonio Spurs played the Miami Heat in a Best of 7 series.  The Heat won in 7 games and LeBron James captured his second straight ring and another Finals MVP.  This is the first Finals rematch since the 1997-98 Utah Jazz played the Chicago Bulls (with Chicago winning both times).
It looked like the Spurs were about to win the Finals last year with the Heat down 5 with less than a minute to go in Game 6.  However, thanks to a clutch last second three by Ray Allen, Miami was able to go into overtime and take Game 6 as well as Game 7 two days later.
The point I’m trying to make here is that the revenge factor will be at play.  San Antonio feels that they should have won that series last year and Tim Duncan after beating the Oklahoma City Thunder in the Western Conference Finals publically stated “We’re happy it’s the Heat again”.  LeBron countered by stating that his team needs to rise up and embrace this challenge.  If the Heat win they will become the first team to “3-Peat” since the 2000-2002 Los Angeles Lakers.  Miami is also in its 4th straight Finals (they lost to the Dallas Mavericks in the first while beating the Oklahoma City Thunder in the second appearance).  San Antonio has a chance to capture their franchise’s fifth title.
Here’s what I think.  If the Heat can win either of these first two games in San Antonio than that is a huge momentum swing in their favor.  If they are unable to do so and have to play Game 7 at home than they will probably lose the series.  On the other hand if they can close it out at home in Game 6 than all bets are off (just ask Indiana).  Here is the schedule for the 2014 Finals.
Miami vs. San Antonio

This is hard for me to admit but given the momentum that San Antonio has I’m not sure the Heat will be able to overcome them again this year.  LeBron is still the best player in the game, but even then this is still a tough matchup for the Heat.  The Heat have met every single one of their challenges this year, but San Antonio has been playing great basketball since the middle of the season and the Heat at times looked lost against top Western Conference competition.  Here are my predictions.
Spurs in 7
Finals MVP:  LeBron James
LeBron will become only the second Finals MVP on a losing team and the first since Jerry West for the Los Angeles Lakers in 1969.  I still think he will put up a great series but as a team San Antonio is very tough to beat.  He’s had a great postseason, but that run ends in this playoff series.  Sorry!
Stay Classy Everyone!
HOHOHO!