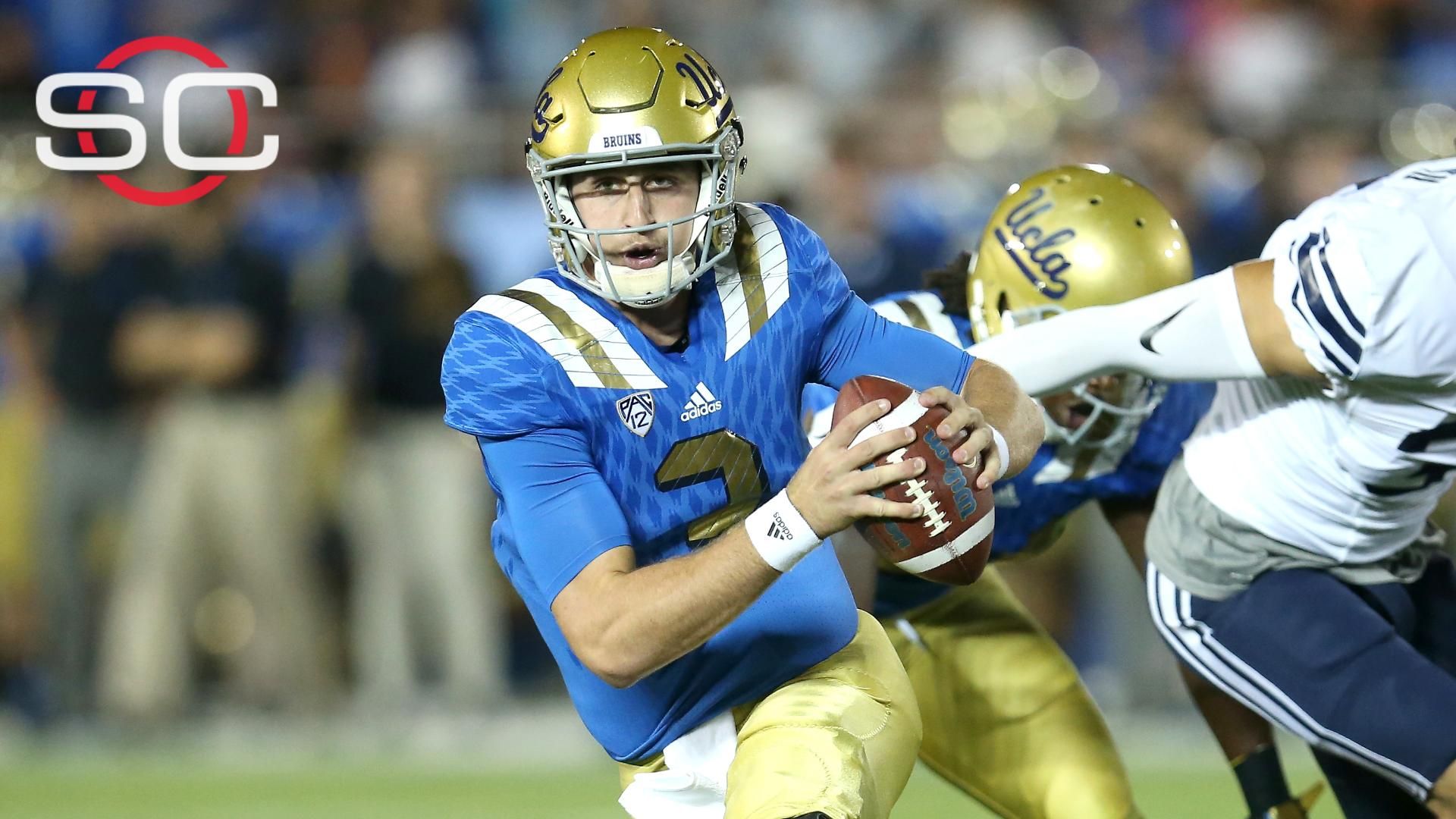 UCLA Quarterback Josh Rosen was able to put his struggles against BYU behind him and pull together a strong statement victory for UCLA.

One of these two teams very well could represent the Pac-12 South in the Conference Title game.  Maybe even the College Football Playoff.  Notice that I said one of those teams, as #9 UCLA made a strong case tonight throttling #16 Arizona by a score of 56-30.

The scoring started with Arizona sophomore quarterback Anu Solomon throwing a 34 yard touchdown pass to Nate Phillips to give the Wildcats an early 7-0 lead.  This was their only lead of the game.  UCLA responded with freshman Josh Rosen’s 35-yard touchdown throw to Thomas Duarte.  Arizona fumbled the ball on its ensuing series and it was recovered by UCLA outside linebacker Deon Hollins.  Tailback Paul Perkins romped for a 16 yard touchdown run to make the score 14-7.

The second quarter started with Paul Perkins getting his second rushing touchdown, this being a one yard score to give the Bruins a 21-7 lead.  Anu Solomon was the victim of Arizona’s second fumble on the next drive and Deon Hollins recovered his second fumble of the day.  Rosen threw his second touchdown on the day to Jordan Payton, this one for five yards, to stretch the lead to 28-7.  Solomon was knocked out of the game after completing a 12 yard run, but backup quarterback Gerrard Randall responded with a 39-yard touchdown run to cut the lead to 28-14.

It was all Bruins from that point onward.  Nate Starks added a three yard rushing touchdown of his own, and on Arizona’s next drive Randall was intercepted by Ishmael Adams to set up another Perkins one-yard touchdown run to take a 42-14 lead.  Arizona missed a field goal to end a woeful first half.

Randall completed a 16 yard touchdown pass to make it 42-20, but Arizona missed the extra point.  The Wildcats also got three points off of a Casey Skowron 44 yard field goal, but the Bruins responded with an 8 yard touchdown run by quarterback Josh Rosen to make the score 49-23.

In the fourth Soso Jamabo ran ten yards for a touchdown to make the score 56-23.  Arizona scored a garbage time touchdown to make it 56-30 after a two-yard run by Jared Baker, but by then it was too late.  The game was over.

Josh Rosen had 284 passing yards and three touchdowns total (2 passing, 1 rushing) to lead the charge for UCLA.  Nick Wilson had 136 yards for the Wildcats and was the leading rusher in this game.  Jordan Payton was the leading receiver with 136 yards and a touchdown.  UCLA had over 500 yards of total offense tonight.

Didn’t see a lot from star linebacker Scooby Wright in this game, and there are a lot of concerns for the Wildcats in this one, especially considering they lost the turnover battle 3-0.  They may have taken themselves out of the playoff picture with this effort.

As for UCLA, the conference belongs to them.  #13 Oregon is currently getting blown out of Autzen by #18 Utah by a score of 55-13.  Also considering that archrival USC lost earlier this year, the South could come down to a November 21st tilt in Salt Lake City between UCLA and Utah.  Maybe even the entire conference.

The balance of power has shifted in the Pac-12, and it’s clearly in the South.